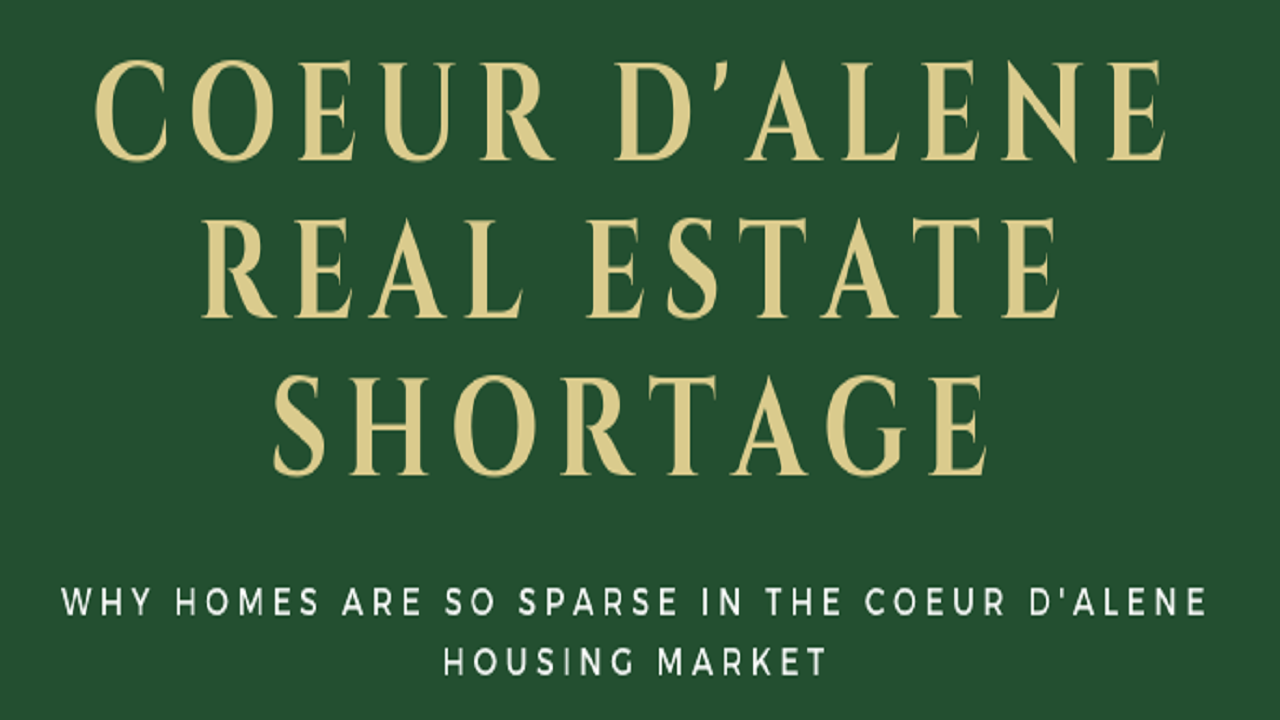 “Urban Sprawl” in the Coeur d’Alene housing market? Not so fast!

In November 2017, Garth Brooks came to Spokane Washington to do a concert.

When the tickets went up for sale, the concert sold out in less than 90 minutes.

Because of the unprecedented demand, event organizers decided to add six more shows that week. In the end, all seven concerts sold out in three hours, for a total of 84,000 tickets sold.

Like the Garth Brooks concert, the Coeur d’Alene real estate market is experiencing unprecedented demand! It seems like everyone wants a ticket to the show…

According to the U.S. Census Bureau  Idaho was the fastest- growing state in 2017.

Coeur d’Alene and Boise had the No. 5 and No. 7 spots, respectively, as the fastest- growing metropolitan areas in the country in terms of percentage growth.

Certainly, with all that growth, the Coeur d’Alene area is destined to turn into a sprawling metropolis, right? Not so fast…

Unlike the Garth Brooks concert, the Coeur d’Alene housing market has a limited number of “seats” and is unable to add the homes to accommodate the demand.

Some of today’s other fastest growing cities have large swaths of agricultural land (Boise area) and/or desert (Las Vegas area) that they are converting into developments.

Yes, the Coeur d’Alene real estate market will continue to see high demand, however, its future growth will be limited and specified because of two things: topography and philosophy.

How will future growth in the Coeur d’Alene market be limited by Topography?

Like a limited number of seats at a concert venue, the amount of land to develop in the Coeur d’Alene market is very limited.

Kootenai County, the home of Coeur d’Alene, has very little land left to develop because most of the land mass (approx. 85%) is public land and natural resource land… both prohibit development.

Only 15% of all the land is developable. 14% of the developable land is rural residential with three quarters of the lots being 5 acres or more! 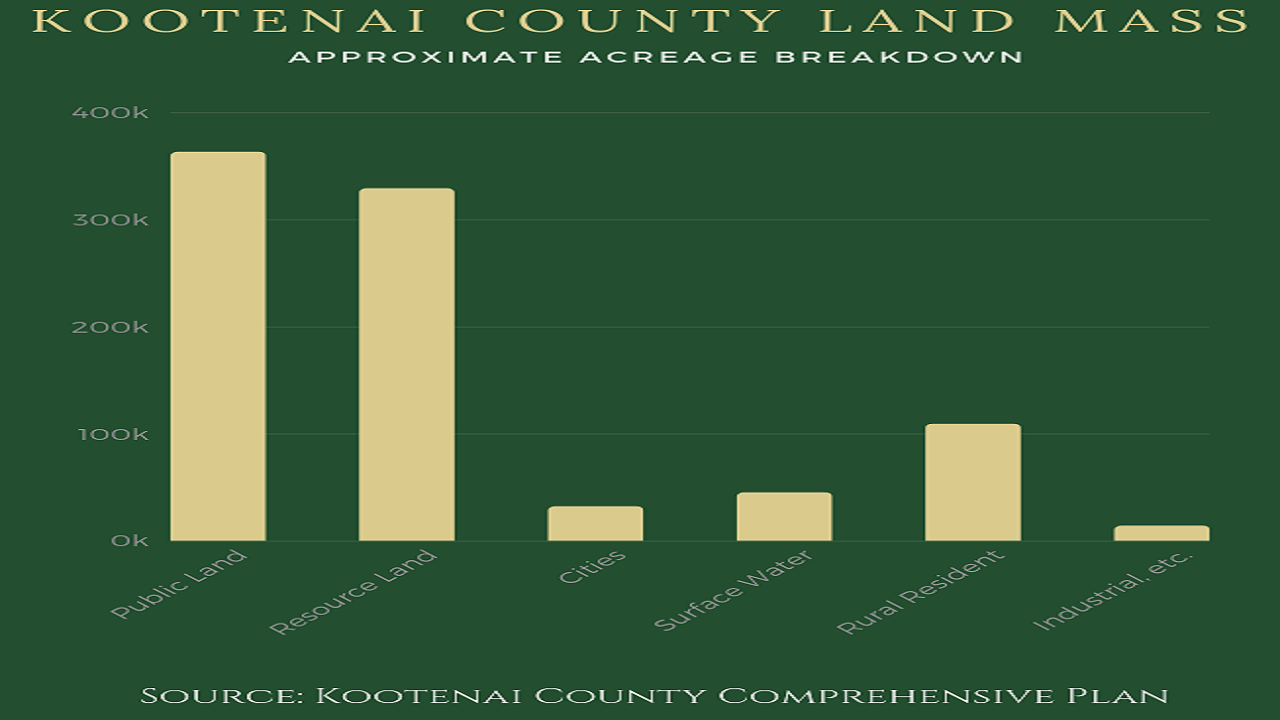 Sixty-nine percent (69%) of the total county population live in the incorporated cities!

On can see in the map below most of the surface area in Kootenai County is mostly Public land, Natural Resource land and water. 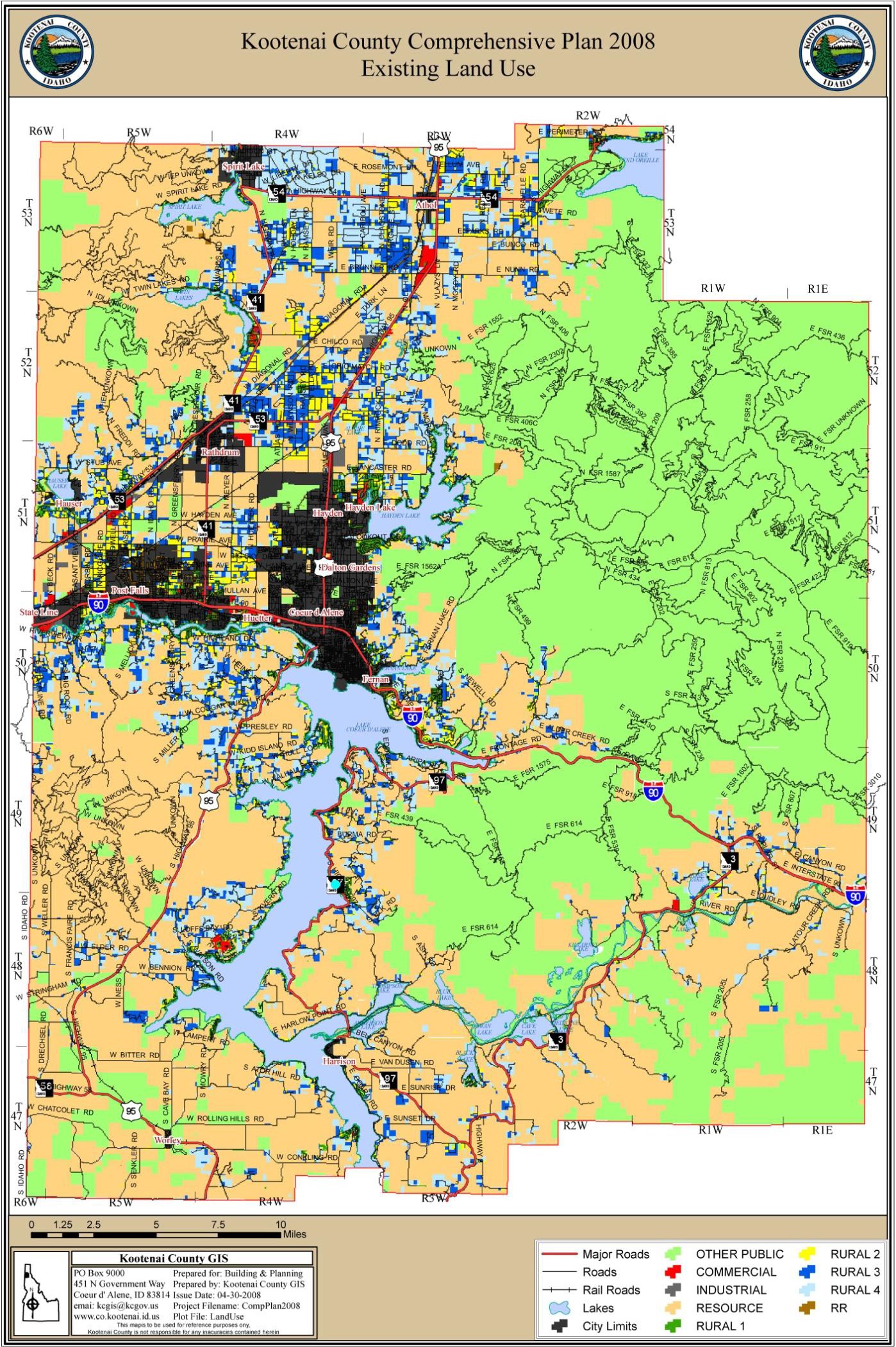 So, the future growth in the Coeur d’Alene area will be very limited because the physical make-up (topography) of the area is dominated by public land, natural resource land and surface water.

How is future growth in the Coeur d’ Alene market limited by Philosophy?

As seen above, there is very little land to develop in the Coeur d’Alene housing market, and going forward, how that land is to be developed is very specified by the Kootenai County Comprehensive Land Use Plan.

Kootenai County’s Comprehensive Land Use Plan is effective through 2028. The Board of County Commissioners approved the amended Plan on Thursday, December 30, 2010.

The common theme throughout this plan is stated in one of the opening paragraphs:

“The beauty, heritage, and rural character are what attract people and their families to Kootenai County. Therefore, it is crucial that the County use this plan to establish the policies, standards, and priorities that, along with timely changes to ordinances, will determine the future landscape and character of this County.”

Sounds good, right? Every community in America wants to preserve their beauty and character. But, how many of them codify that desire into law?

Proof of this commitment to maintain a rural character is in Title Eight of the Kootenai County Land Use code which states:

8.2.103: LOT SIZE AND OPEN SPACE REQUIREMENTS: The minimum size for lots or parcels in the Agricultural zone created on or after January 3, 1973 shall be five (5.00) acres.

This means the “Urban Sprawl” type subdivision developments are not available for developers. Instead of 5 homes on one acre, they must do one home on 5 acres…not quite as profitable!

Another of the stated goals of the County is to: “Encourage Urban density development within cities. Encourage urban infill where possible to avoid sprawl and leapfrog development thereby conserving fringe open lands.” Or, to put it into different terms…Up, not out!

What is left to develop in Kootenai county is specified in the Kootenai County Land Plan as “Border” and “Transitional” land around the incorporated cities. As stated in the plan, “Until annexation has occurred and until city services can be provided, these areas are generally not expected to be intensely developed or further subdivided. Once annexed, consistent with the city’s long-range plans, the areas within this designation are ultimately expected to be served by urban services which will then facilitate its further development and urbanization.”

These transitional areas are gray and purple on the map below: 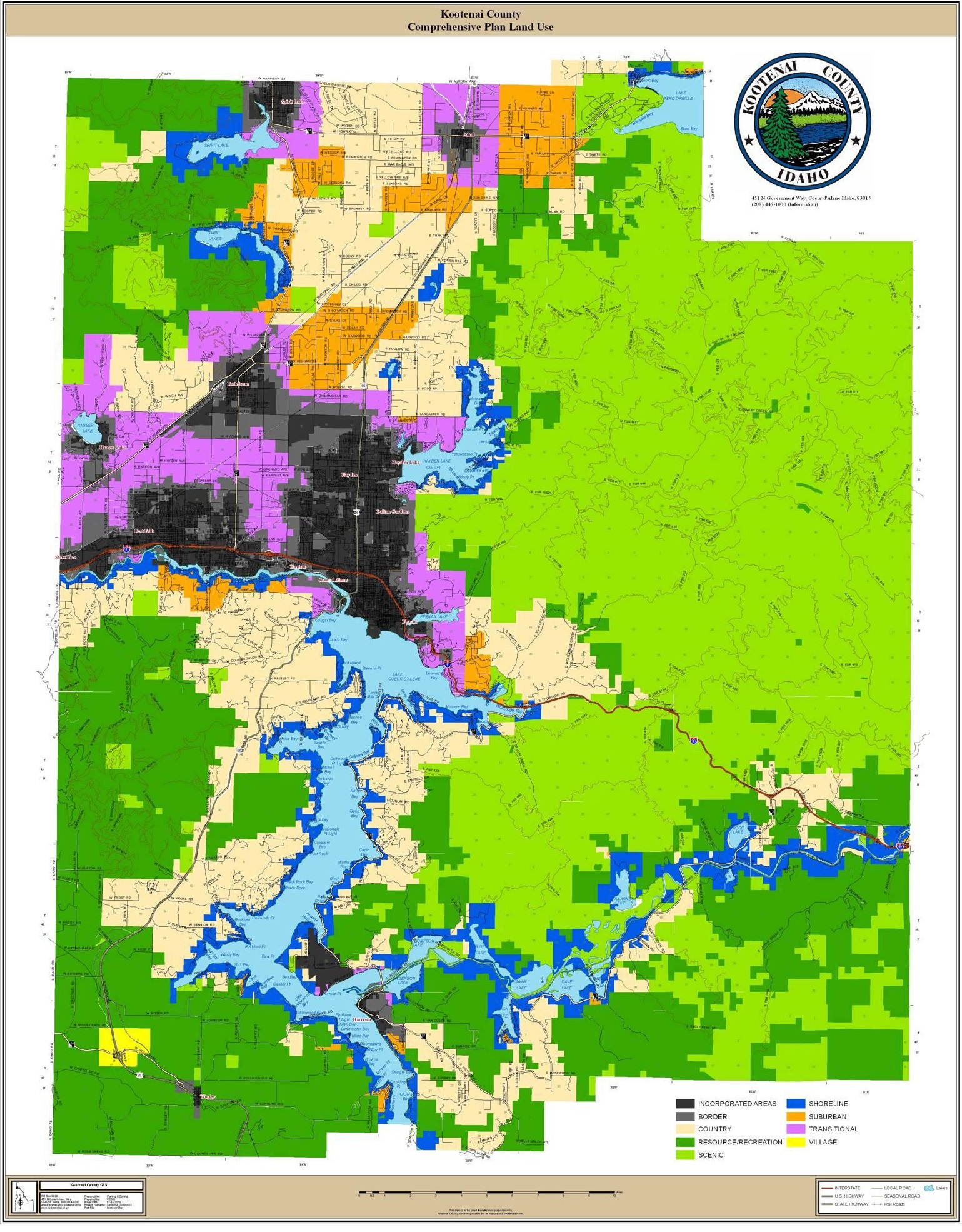 Even after the cities have their impact on the transitional areas (decades from now), Kootenai County will still be dominated by Public land, Natural Resource land, water, and rural residential homes of 5 acres or more!

So, in review, the Coeur d’Alene housing market is buffered from “Urban Sprawl” due to its unique topography and its philosophy to stay rural on the part of the community and its leaders. Without the urban sprawl, inventory will only become more limited.

Combine the limited and specified inventory with the strong demand by many to Live Better in North Idaho, and the outlook for entering the Coeur d’Alene housing market looks as intense as a Garth Brooks song,

“Well, it's bulls and blood, it’s dust and mud…and they call the thing Rodeo”