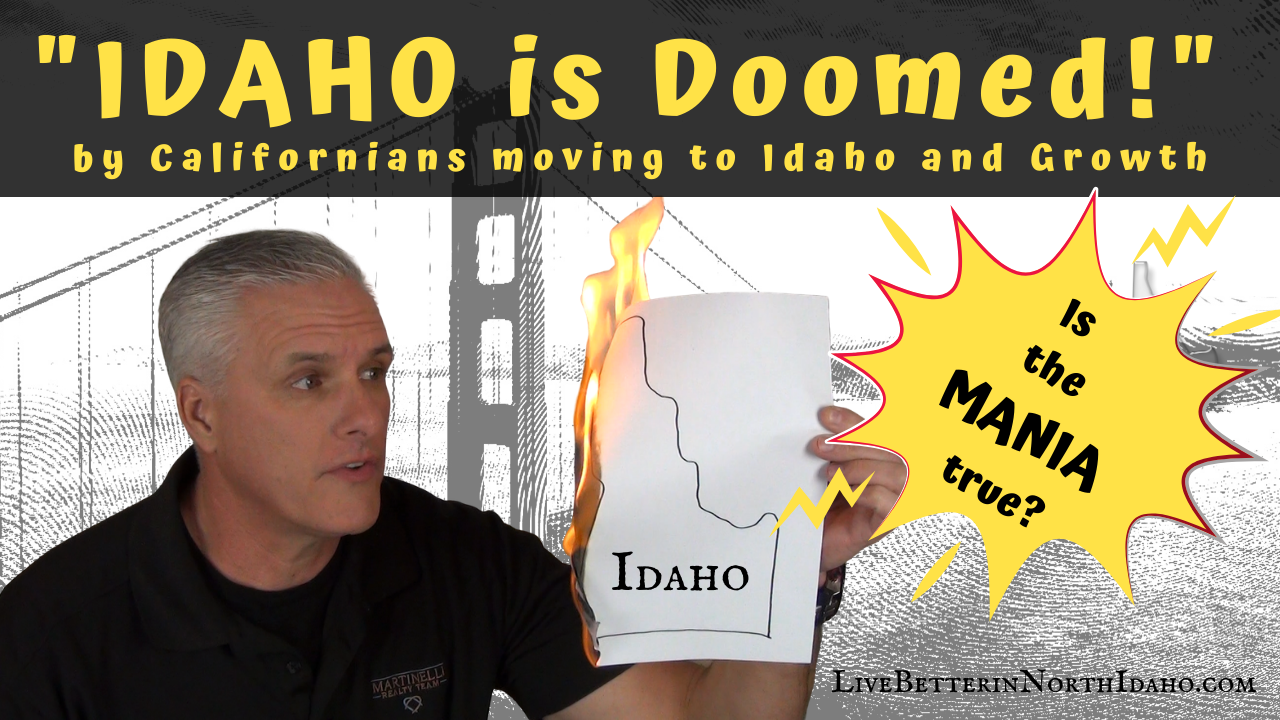 The number one state people came from was...California.

Looks like, Idaho is being consumed by Californians and Population Growth!

US News announced that in 2019, Idaho was the fastest growing (by percentage rate) state in America!

That is the third straight year Idaho has been “crowned” with the title, “Idaho, the Fastest growing state in America!”

That is just one of the may headlines drawing attention to Idaho.

Another example was in January of 2019, when “Tucker Carlson, Tonight” of Fox Television, did a series called “American Dystopia.” In that series, Tucker documented the decline of San Francisco, California.

With images of feces and drug needles littering the streets of San Francisco in the background, Tucker says, “Since July 2018, more than Forty thousand Bay Area residents have fled, mostly to states like Texas and Idaho.”

In addition to periodical and prime-time television headlines, there is the synchronized rise of social media, where it is not uncommon to hear supposed Idaho locals complaining about growth and specifically blaming Californians for increasing real estate prices and vehicular traffic congestion.

Add to the “vocal locals”, the countless opinions of those who don’t even live in Idaho. To them the sensationalized reports of Idaho’s growth, provides them fuel to add to the flames. In their office water cooler gossip or online chat rooms they predict, “It won’t be long with all that new growth before Idaho turns into a liberal state like California, Washington, and Colorado.”

Yep, if you believe the hype, 13 out of 10 people moving to Idaho are from California and they all want to turn Idaho into San Francisco.

If one did not know better, it would be easy to assume Idaho is experiencing an inferno of growth that is unseen anywhere else in the country and destined for the meltdown of metropolitan overpopulation and liberal politics.

But, is the population growth in Idaho worthy of the sensationalized headlines?

My purpose here is not to minimize the growth Idaho is experiencing.

It is well documented that Idaho is the fastest growing real estate market in the country and had the highest percentage rate of population growth for the third straight year.

The purpose of this article is to provide a no hype- proper perspective about growth in Idaho.

What is dominating the papers, televisions, and internet is what I call… “Idaho Monomania!”

Monomania is an obsessive preoccupation with one thing.

“Idaho Monomania” is an obsessive preoccupation with Idaho. Let’s face it, Idaho is a sexy topic for those who publish content. The fact that I wrote this article and that you are reading it proves that point.

“Idaho Monomania” is where people fixate and obsess on Idaho’s growth, and anything related to it, and tend to forget it is not the only state with growth or growing pangs.

Monomania is similar to tunnel vision. Let me demonstrate.

If you were to see my face in a crowd, you would not pay it much attention.

But, what if, “World News Tonight” did a documentary on the scar over my right eye and told the story of how I put my eye too close to the scope while shooting a buck. What if they showed the recoil in slow motion forcing the scope back into my face and splitting my eye open.

Or, what if “Sixty-Minutes” did an expose on the scar on my chin that I received as a second grader chasing girls through the playground. And they interviewed another student who said they saw me slip on some gravel on the blacktop and the first thing to hit the ground was my exploding chin.

Or, what if my neighbor Tweeted, “Kory’s face has issues. I have seen his acne scars up close, and now I can’t sleep at night.”

Better yet, what if your coworker told you over the water cooler about the super thick long hairs in my eyebrows?

After being bombarded with the intimate details about my face, you would so familiar with my face, you would tend to think my face was pretty “jacked” and would be certain to cross the street if you ever saw me approaching you in downtown Coeur d’Alene!

But my face is not the only face out there. And if you did similar research on my brother-in-law’s face, you would find my face way more attractive!

Idaho is the same way. Let me demonstrate.

If you remember the opening of this article where I told you, “80,000 people moved to Idaho in one year! The number one state people came from was California. That made Idaho the fastest growing state in America!”

With that info it looks like, Idaho is being consumed by Californians and Population Growth!

Just like my face and all its blemishes, Idaho looks pretty “jacked” at this point. This is "Idaho Monomania."

However, when we look at some other states, Idaho does not look so bad.

In fact, in 2018, there were 30 states that had more people in-migrate from other states than Idaho did!

Let’s look at the top ten: 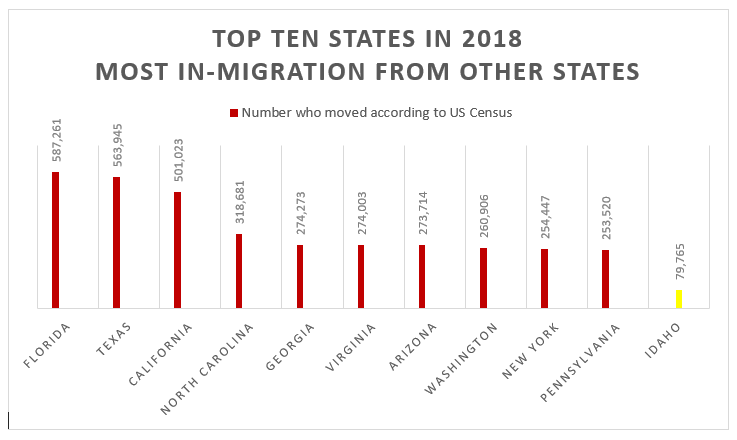 When we open up our perspective to facts and not just the hype, 80,000 does not sound as bad as first thought.

And what about Californians moving to Idaho?

Tucker Carlson did specifically mention that Idaho as one of the places Bay Area residents were fleeing to.

Surely, all the Californians are moving to Idaho, right? 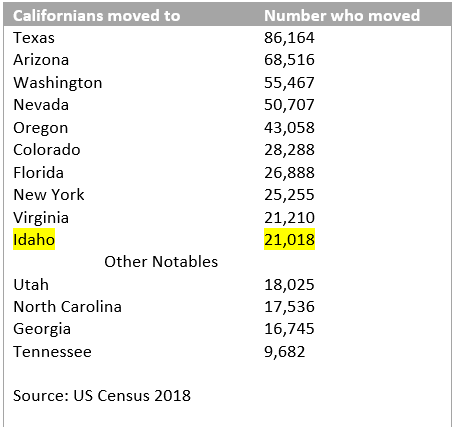 Of the top ten places Californian’s moved to, Idaho was #10.

Nine other states had more in-migrating Californians than Idaho.

Virginia had more Californians move there than Idaho did!

And Texas, who was in the top spot, had 4 times the Californians migrate there than Idaho did!

To put things into a more accurate perspective here is the breakdown or where people who moved to Idaho came from: 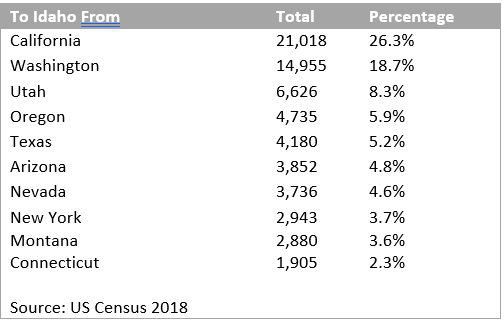 And what about Californians and population growth turning Idaho into San Francisco? Surely, with all that new growth it is just a matter of time, right?

Truth is, GROWTH IS NOT NEW TO IDAHO!

As you can see here, Idaho has been the fourth fastest growing state in the nation since 1990: 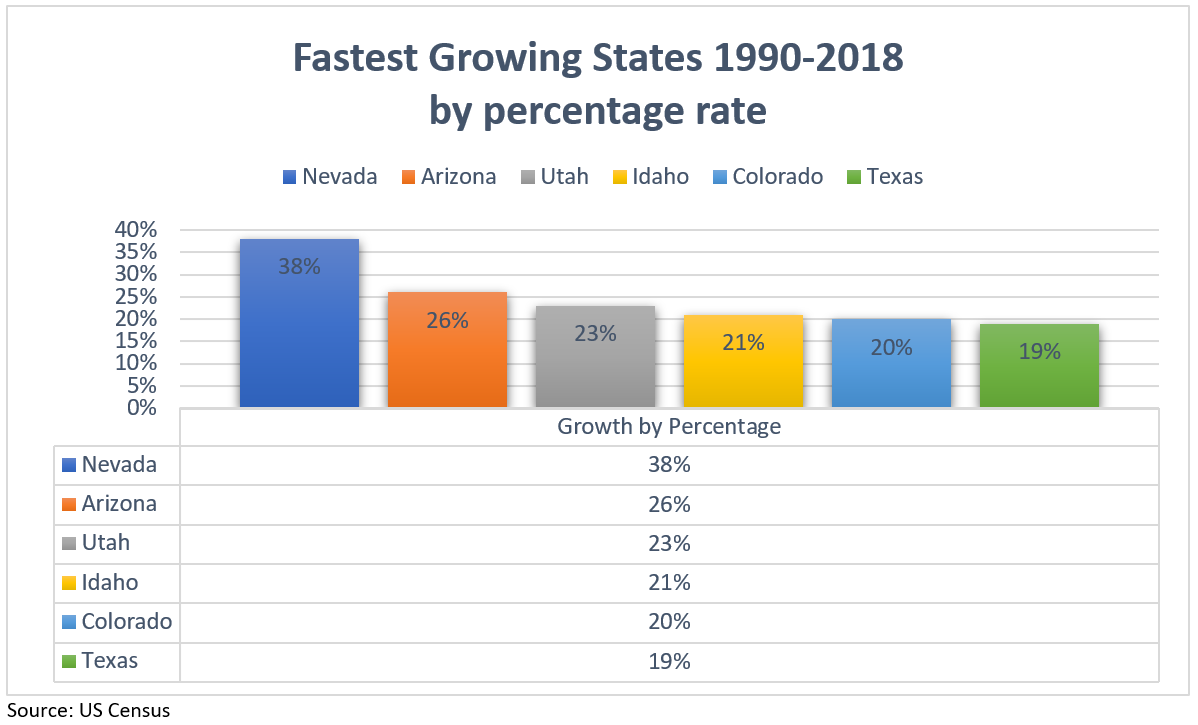 Still, even with the aggressive growth over the last 30 years, Idaho is still one of the least populated states in the country: 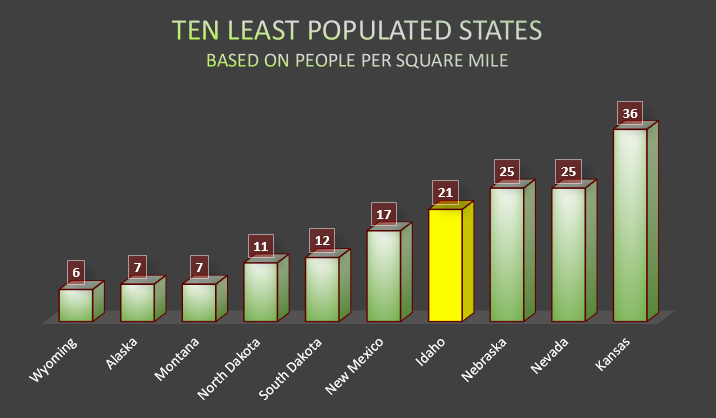 And, with the growth over the past 30 years, Idaho has grown into one of the most Conservative states in the Country, as documented by Gallup here: 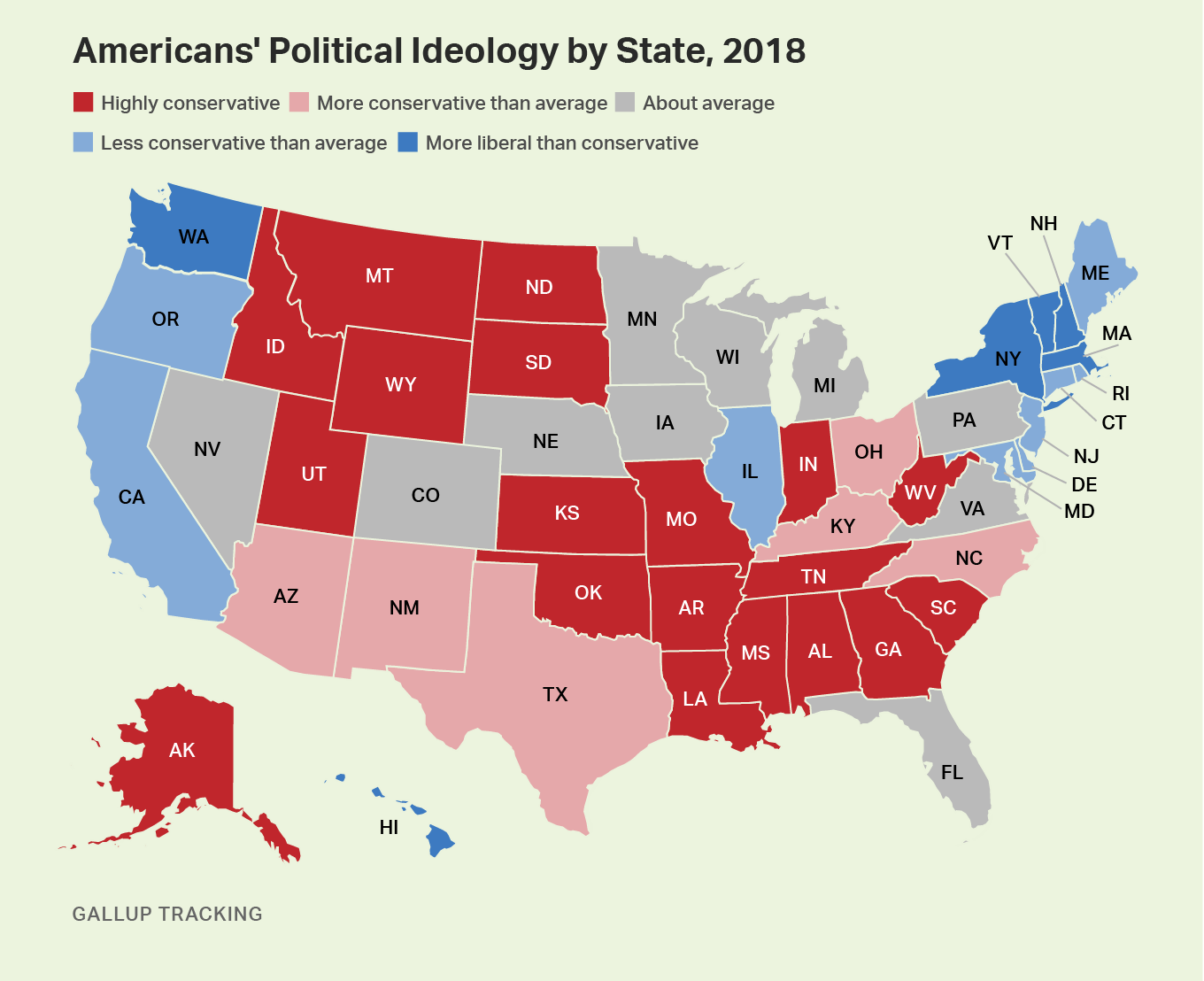 A look at Idaho election results since 1990 shows the state is becoming more Conservative with all the population growth:

Evidence of the growing Conservative culture in Idaho can also be seen in recent legislation.

SECOND AMENDMENT RIGHTS: In 2019, Governor Little signed into law HB 206 which allows any resident over the age of 18 to carry a concealed weapon throughout the state, whether within city limits or outside city limits (unincorporated land) without a permit.

In 2019, Gun and Ammo Magazine recognized Idaho as the second best state for gun ownership : 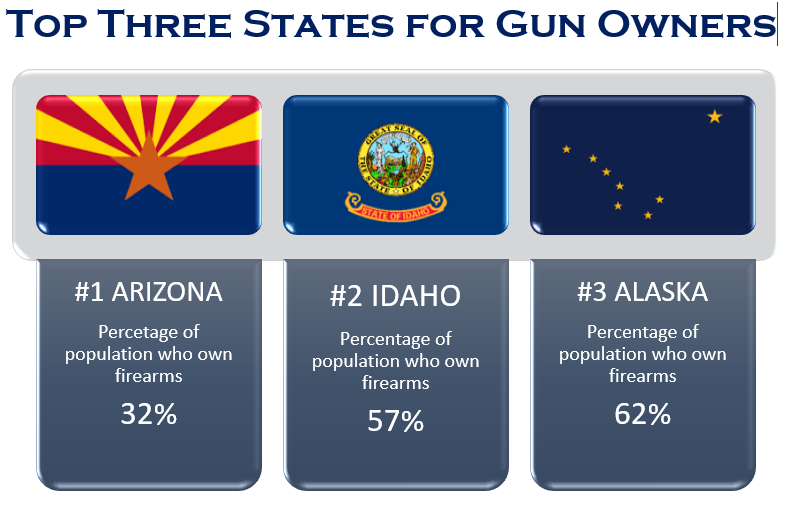 So, all the predictions of Californians and population growth turning Idaho into San Francisco…yeah, no!

So, in closing, IDAHO IS GROWING.

And in recent times, her growth has caused many to be preoccupied with her blemishes and scars.

But, those who obsess over her blemishes and discount her without knowing her true character and beauty, may well miss a dance with the prettiest girl on the dance floor!

Source of US Census data: HERE